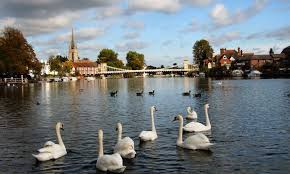 Heathrow Airport to Marlow Taxi Service is provided by A1 Taxis Maidenhead. We offer a transfer service from Marlow to any U.K Airport. If you are traveling to or from Heathrow Airport please go to the bookings page for an instant quote. All our bookings are pre booked so you can rest assured we will be there to meet you or take you to your destination.

The town of Marlow is located West of Heathrow Airport a distance of 21 miles that would take around 25 minutes by taxi via the M4 and A40. It is situated in Buckinghamshire on the River Thames and has a population of 14,004 according to the 2001 Census. The name of Marlow was recorded in 1015 as 'Mere Lafan' meaning 'land left after the draining of a pond'. Marlow gained importance due to its location on the River Thames and had belonged to the Earls of Mercia before being owned by William the Conquerer and then to various noble families over the centuries. It is well known for its Rowing Club that was founded in 1871 and earliest records indicate that the first Regattas were held annually from 1855. Many notable people have lived in Marlow including Mary Shelley, T.S Eliot, Dr William Battie and Sir Steve Redgrave

The town has many places of interest and attractions to offer visitors and tourists, the surroundings offer scenic views of the River Thames and the countryside of Buckinghamshire. Some day trips available for visitors include Salters Steamers, Stanley Spencer Gallery, Cliveden House, Odds Farm and The Hell Fire Caves. There are some beautiful manor houses in the surrounding areas to visit such as Windsor Castle.